Think you know all about Christmas Trees?  Read more . . . 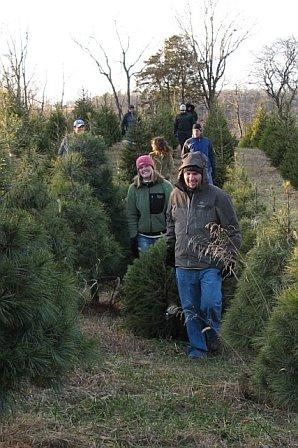 Each year there seems to be more varieties to choose from for that perfect Christmas tree. The varieties vary in characteristics, availability and price.

Fraser firs have been referred to as the “Cadillac of Christmas trees.” The needles are flat, 1/2 to 1 inches, and have a rich, dark green color with a silvery underside. It has excellent color and needle retention characteristics. They tend to be “naturally-shaped” Christmas trees. Although becoming somewhat more prevalent, due to their limited production in this area and their high quality, they may be harder to find and higher priced than other varieties.

For a “full” appearing tree, white pines are often good. They are widely available in the Midwest. It has longer needles at 3 to 6 inches. It has generally good needle color and retention.

The spruces are gaining in popularity, too. The needles tend to have good retention, and are shorter and stiffer than some of the other varieties. The spruce varieties often are popular when buying a live Christmas tree for planting in the yard after the holiday. Remember, live trees do need some special care for successful planting after the holidays.

The traditional favorite Scotch pine has 1 1/2 to 3 inch blue-green needles, which have a somewhat twisted appearance. The branches tend to be more open and stiffer than the white pine. Many people prefer it since it often is easier to hang ornaments on its branches. It is also often one of the most widely available and reasonably priced varieties.

Other varieties are also available at tree lots or from fresh-cut tree farms.

Regardless of the variety of the tree, be sure to properly water the tree and keep it in as moist and cool of a location in the house as possible. Avoid putting it near heat outlets. Be sure to check the water level at least daily. The water should never drop below the bottom of the trunk of the tree. These will help lengthen the tree’s enjoyment and safety.

With all these choices, everyone should be able to find that “perfect tree.” Buyers may want to take a day for a holiday outing to discover the different types of trees available and to make some consumer comparisons. It can be a fun outing, as well as good consumer shopping, to go out and compare the varieties and the costs at various farms and sales lots.

We know you will enjoy your visit to our farm!